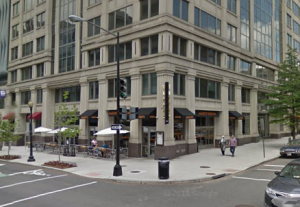 Arlington Cinema and Drafthouse will soon have an outpost for standup comedy in downtown D.C.

The owners of the Northern Virginia-based business announced today plans to open an “arts space committed to comedy and our community” called the Drafthouse Comedy Theater at 1100 13th Street NW in January.

According to a press release, the forthcoming theater will be a stand-up comedy venue with occasional sketch and improv shows.

“This will significantly increase the opportunity to feature a diverse offering of top national comics to the D.C. area,” the press release says. “As we expand our offerings in the first year, we will add off-Broadway style comedy arts to the line up.”

According to the venue’s website, comedians Todd Barry, Baron Vaughn and Janine Brito will be among the first comedians to perform at Drafthouse Comedy.

When it opens, the theater will serve beer, wine, liquor and “light fare.”

The owners of the Arlington Drafthouse are thrilled to open a comedy arts theater in Downtown DC! We have chosen to be different than the typical comedy club and instead offer an arts space committed to comedy and our community. This means great sight lines, an intimate setting, and no minimum purchase requirements for patrons, tall ceilings, and shared laughter.

We will feature mostly stand-up comedy, while also dedicating time to sketch and improv. Shows will be targeted to 70 to 80 minutes in length. Each weekend will feature, on average, 8 shows (2 on Thursday, 3 on Friday, and 3 on Saturday). This schedule allows for two headliners to perform each weekend, splitting the shows between them. This will significantly increase the opportunity to feature a diverse offering of top national comics to the DC area. As we expand our offerings in the first year, we will add off-Broadway style comedy arts to the line up.

The Drafthouse Comedy Theater is styled after a black box arts theater. The theater is located in the heart of downtown Washington, DC on the corner of 13th and L streets NW – 3 blocks north of the theater district and 3 blocks west of the Convention Center.

As a black box theater, the Drafthouse Comedy Theater will offer concession beer, wine, liquor, and some light fare. There are no minimum purchase requirements for patrons, nor is there tableside service. Doors open typically 20 minutes before showtimes and seating is general admission.