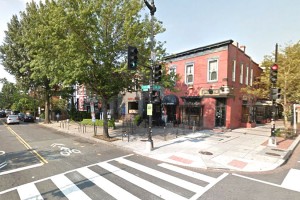 A man in a car drove up to a woman, got out, attacked her and then fled with her iPhone near the U Street corridor early this morning, police said.

The robbery happened on the 1900 block of 11th Street NW about 12:45 a.m. The block includes Solly’s Tavern and Vinoteca.

The woman was on a sidewalk in the area when a car with three men came up to her, according to authorities. One of the men then hopped out of the vehicle and went up to the woman.

“That’s my phone!” the man told the woman, before snatching her iPhone 6 from her hands, according to police. The victim then begged the man to return the cell phone.

Instead of giving it back, the thief pushed the woman to the ground, according to authorities. He then got back into his car and drove away with the two other men.