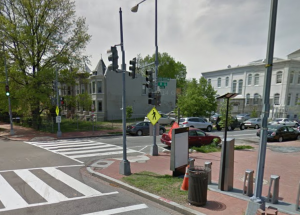 (Updated at 6:02 p.m.) An assailant stabbed a man in Shaw earlier this afternoon, said D.C. Police.

According to police, the crime happened on the 1700 block of New Jersey Avenue NW around 4:30 p.m.

The victim of the stabbing was “conscious and breathing” when officers arrived on the scene, said authorities.

Police are on the lookout for a bearded man described as being black, five-feet-ten-inches tall, around 240 pounds and wearing grey sweat pants with a black stripe on the side.

In other crime news, police said gunshots were reported and a car was hit with bullets near Meridian Hill Park earlier today.

The car, located at 1600 Euclid Street NW at the time of the gunshots, was occupied when it was struck. But police said nobody was injured by the gunfire.