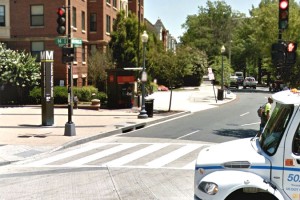 The attack happened on the 1300 block of Irving Street NW about 8:30 p.m. The block is between the DC USA retail development and Tubman Elementary School.

The victims and the assailant met in the area to “verbally resolve a dispute,” according to authorities. With the Chipotle cup in hand, the attacker then asked one of the men to walk to a nearby alley. The man and the assailant soon went to the alley and the other men followed.

Once in the alley, the attacker opened the Chipotle cup and flung the bleach inside it onto the men.

The victims told police their eyes hurt after the attack. But they declined medical attention.