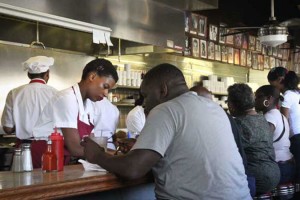 Diners at the Florida Avenue Grill soon might have the option to order something harder than soda with their fried chicken, pork chops and other soul food.

For the first time in its 71-year history, the restaurant at 1100 Florida Ave. NW has applied for a liquor license, according to a notice published by the D.C. Alcoholic Beverage Regulation Administration this week.

Imar Hutchins, who has owned the eatery since 2005, said many of his customers have asked for booze. And without liquor, the grill’s dinner business has become almost “nonexistent,” he said.

Hutchins said he didn’t know yet what alcoholic drinks he would serve. But the adult beverages wouldn’t become the focus of the restaurant, which has had a dedication to soul food since it opened in 1944.

“We’re not trying to turn it into a bar or anything like that,” he said.