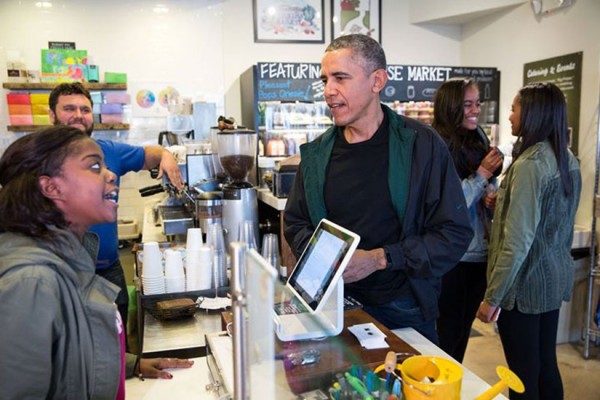 Obamas at Pleasant Pops — President Obama and his daughters, Sasha and Malia, visited Pleasant Pops in Adams Morgan over the weekend as part of Small Business Saturday, a day in which shoppers are encouraged to visit local stores and restaurants. The president had a strawberry ginger lemonade pop, while Sasha ate a cookies and cream pop and Malia sampled a cranberry apple pop. [CBS News]

Displacing Shaw Public Housing Tenants — The District is forcing elderly public housing tenants to leave single-family homes in Shaw and other parts of D.C. in an effort to sell the properties for profit. “The money that I paid there for the 42 years I was there, I could have had the house paid for,” said 84-year-old Levant Graham, who lived in a Shaw single-family home for public housing tenants. “I thought I had a good chance of getting the house, but I guess I didn’t.” [Associated Press]

Sietsema on Convivial — Washington Post food critic Tom Sietsema wrote that Convivial in Shaw is “putting customers first” and has a menu that’s “unlike any other restaurant’s in the city.” It serves “enticing entry points” like “crisp potato pancakes dressed with julienned celery root and crimson folds of dry-cured lamb; and leeks dijonnaise, basic on paper and beautiful in reality,” he wrote. [Washington Post]