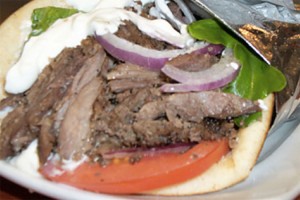 (Updated at 4:25 p.m.) Yamas Mediterranean Grill is planning to expand its gyro and baklava footprint in the District with a new outpost in Adams Morgan early next year.

The small D.C.-area chain is slated to begin serving customers in mid-January at 2418 18th St. NW before the location is scheduled to make its official debut in March, owner Tony Alexis told Borderstan today. The outpost in the former Shawarma Spot space will be the chain’s third eatery, after restaurants at 1946 New Hampshire Ave. NW and in Bethesda.

Alexis said in an email that he realizes it may seem odd to open an eatery that is less than a mile from his New Hampshire Avenue restaurant. But after running into the 18th Street building’s owner, Dimitri Liontiris, in Greece this summer and checking out the space, Alexis said growing his business in the area made sense.

“I love D.C., and I want to be part of its renaissance,” he said. “The Borderstan [coverage] area does not only remind me of a European city that is built to support and encourage its residents to get out and enjoy life, but it also is an exciting place to expand on our concept of a reasonable priced, healthy and flavorful Greek- [and] Mediterranean-inspired fast casual restaurant.”

In addition to gyros and baklava, the Adams Morgan location is expected to have veggie and lamb burgers, Greek fries and grilled vegetable dishes, among other food.

The location likely will serve customers from 11 a.m. to 11 p.m. on Tuesdays, Wednesdays, Thursdays and Sundays, and 11 a.m. to 3 a.m. on Fridays and Saturdays. It likely will close on Mondays.

“We are looking forward to establishing Yamas Grill at Adams Morgan as the place to enjoy a great lunch, dinner or after-hours snack,” Alexis said.