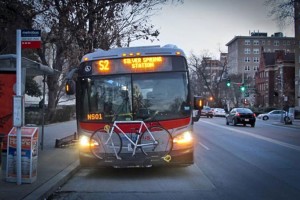 Community leaders in Adams Morgan last night endorsed a proposal that would add temporary bus lanes to the road in an effort to fight the overcrowding and erratic service that often plague the S1, S2, S4 and S9 lines.

ANC 1C commissioners last night voted 6-1 in support of a resolution that encourages the District Department of Transportation to operate the special lanes from Arkansas Avenue to H Street NW during the morning and evening rush hours.

“I think [bus service] is an absolutely important part of our life as a city,” said ANC 1C chairman Billy Simpson, who voted in support of the commission’s resolution.

In addition to the lanes, the legislation also called on DDOT to implement systems that would allow bus riders to pay their fares before boarding and would optimize traffic lights for buses in an attempt to make commuting smoother for passengers, among other recommendations.

JonMarc Buffa, who was the only ANC 1C member to vote against the resolution, tried to encourage his fellow commissioners to endorse a plan that would have asked DDOT to focus on off-board payment, traffic light optimization and other service improvement proposals, but not bus lanes. Beekman Place condo owners at 16th and Belmont streets NW and Buffa, whose district includes the area, in October urged DDOT not to remove lanes for normal car traffic, expressing concern for locals who aren’t bus commuters.

“It’s been clear that DDOT is in love with bus lanes,” Buffa said. “It’s the equivalent of their great white whale. They are Ahab.”

The agency is expected to complete its study of transit fixes and alternatives by January.