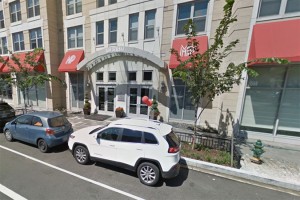 (Updated at 1:10 p.m.) A burglar forced open a door of a luxury Shaw apartment and attacked two women inside this week, police said.

The burglary happened in the Jefferson MarketPlace at 1550 7th St. NW about 9:30 p.m. Wednesday. The upscale apartment building is between P and Q streets NW.

The victims were in the apartment when someone they didn’t know came to the door and asked for a daughter of one of the women, according to authorities. The women had the door open during the exchange and tried to close it after the encounter. But the individual outside the door forced it open.

The person then punched and kicked the women before leaving, police said. The victims declined medical attention.

Police yesterday also released a video in connection with a burglary in Columbia Heights this week.

The burglary occurred at the Uptown Mart at 2701 14th St. NW about 12:15 a.m. Monday. The convenience store is about four blocks south of the Columbia Heights Metro station.

The video shows someone crouched down behind the store’s counter. The individual appeared to be putting items in a bag on the floor.

A burglar stole $230 in cash, an Amazon Kindle, a Samsung cell phone and Newport cigarettes from the store after breaking in through a window, police said.