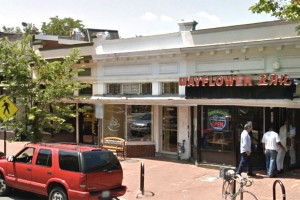 A burglar probably didn’t get what he wanted when he broke into a Mount Pleasant coffee shop early yesterday morning.

A man was spotted biking away from the neighborhood with what was likely an empty cash drawer from Flying Fish Coffee and Tea (3064 Mount Pleasant St. NW), which was burglarized about 1:45 a.m. Tuesday, police said.

A witness saw the man on his bicycle with what looked like a laptop computer or VCR, according to authorities. A Flying Fish Coffee and Tea employee who came to the eatery after the burglary told police that the only item missing was a cash drawer that didn’t have any money in it.

The witness didn’t see the man inside the coffee shop, according to authorities. But an alarm was triggered at the eatery when a front window was shattered.

more stories
Previous
New Business Aims to Teach D.C. Residents How to Smoke Weed
Next
POLL: What Time Should the National Zoo Open?