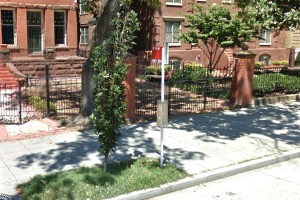 (Updated at 2:35 p.m.) Metrobus riders on 16th Street are slated to have one less place to get on and off the bus starting this weekend.

The southbound stop at 16th Street and Riggs Place NW is scheduled to disappear from the S1, S2 and S4 bus routes on Sunday, according to a Washington Metropolitan Area Transit Authority announcement made this week. Frequenters of the stop can use the nearby S Street and Corcoran Street stops instead.

WMATA also is slated to add a southbound stop downtown for the “Metro Extra” S9 bus on Sunday. The stop will serve K Street NW at 13th Street NW.

The announcement on the stop changes came amid the District Department of Transportation’s work to fight the overcrowding and erratic service of the 16th Street bus lines. The agency is studying the viability of temporary bus-only lanes and other changes to the routes to in an effort to help improve public transit on the street.

Last week, community leaders in Adams Morgan offered their support for the bus lanes and other DDOT proposals.