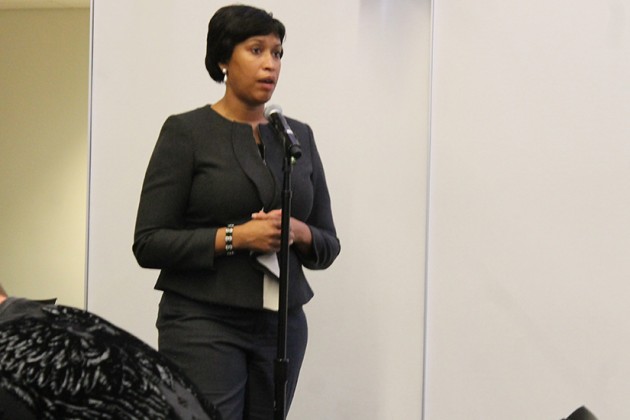 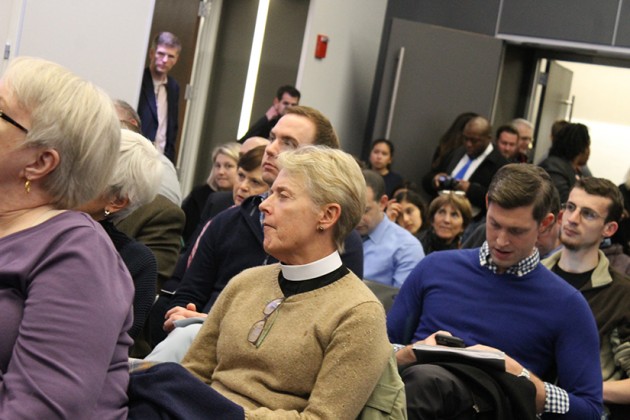 Dupont residents flocked to last night’s ANC 2B meeting at the Brookings Institution (1775 Massachusetts Ave. NW) to ask questions and share their concerns about local issues.

Bowser attended the meeting as part of a series of community forums held across the city, and began her appearance by briefing the audience about the city’s recent efforts in affordable housing and ending homelessness. Then, the ANC 2B’s commissioners took turns weighing in on topics they felt strongly about.

Commissioner Mike Silverstein, 2B-06, kicked off the Q&A by praising the mayor for helping to end homelessness across the District and in his neighborhood.

But Chairman Noah Smith, 2B-09, followed with a “controversial comment.”

“I’m pretty frustrated as an ANC commissioner,” Smith said. “We struggle with balancing the needs of the folks who want to thrive here and the amenities and the culture of our neighborhood that has made it so great.”

Smith said that he thinks the neighborhood suffers from a “lack of vision,” and asked the mayor to help the commission develop a small area action plan.

“The thing about small area plans is this … sometimes it raises expectations that might be fulfilled, or it might not,” responded Bowser. “It might take five years, it might take 25 years. I agree it’s good to have that discussion, it’s good for the community to come together and agree to those goals.”

Bowser added that she’d work with the D.C. Office of Planning to help find a solution.

“Several parts of this neighborhood are disturbed by amplified music from roof decks,” said Abigail Nichols, 2B-05. “The [Nightlife Regulation Noise Act] is stalled in committee following a hearing on October 26. I ask you to press the council to fix this problem.”

“I meet with the chairman once a week. I assure you no mayor has met with the chairman this much,” responded Bowser. “We want neighbors to be able to enjoy quiet … and we want the business owners to have some reasonable expectation on how we enforce the law.”

Other commissioners weighed in with thoughts and concerns about streetscape projects near Dupont Circle and funding and construction at the School Without Walls at Francis Stevens. Then, the microphone was turned over to Dupont residents.

One resident who was frustrated with morning construction noise asked the mayor what he could do in response.

“I always just call the police,” the mayor half-joked. “And I do when I see it,” she said, before adding that solutions would likely need to be worked out with the D.C. Department of Consumer and Regulatory Affairs or developers and not law enforcement.

Another neighbor asked the mayor how she feels about the controversial and long-debated St. Thomas Church redevelopment project.

“We have struck a balance there,” Bowser said. “I spoke with [Ward 2 Councilmember Jack Evans]. He thinks that what is proposed isn’t quite right for the neighborhood … but I also recognize there is an open matter before the BZA. … A feasible solution can be worked out.”

Perhaps the most emotional statement came from Lee Granados, whose children attend the Ross Elementary in Dupont.

“There are students that my children are friends with … in Ward 7 and 8, and those kids spend the night at our house. It is enraging to have to look at those parents … and ask what is going on? Why can’t we finish a simple project?” Granados said, voice wavering. “There is legacy and pride in this school.”

“I can meet with Councilmember Grosso and bang my fist on the table. I can make something happen,” she said. “I worry about the schools across this city whose parents don’t have those abilities because they’re working two, three, four jobs. … it’s not just about our schools. I think we deserve something from DGS and DCPS,” she said.

The mayor responded that she didn’t have direct knowledge of the issues mentioned, but said she’d work with the city’s councilmembers on finding a solution.

The last topic of the night centered around the hotly debated Pepco-Exelon merger.

Bowser replied: “It’s not too long ago when a council chamber would be filled with people complaining to me about Pepco, and now those exact same people are telling me they love Pepco and hate Exelon. You can’t have it both ways.”

“There was an article that said four councilmembers opposed it. The article failed to say that seven councilmembers are supporting it,” Bowser added.