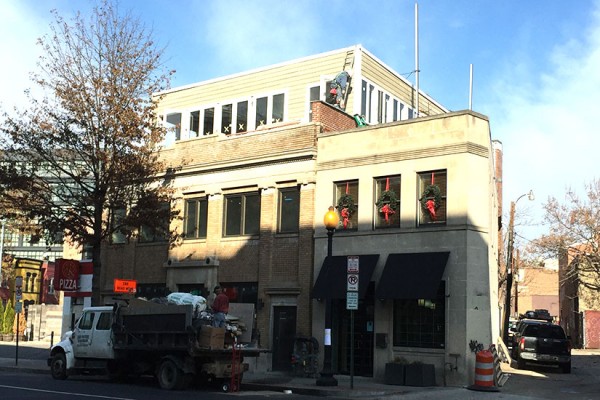 (Updated at 3:25 p.m.) A restaurant with a rooftop beer garden is slated to start serving beer, whiskey and American bar food within weeks on Florida Avenue, its owners announced this week.

Takoda is scheduled to open at 715 Florida Ave. NW in January, according to Ryan Seelbach and Eric Lund, who also own the Huxley nightclub in Dupont.

Going by an American Indian phrase meaning “friend to everyone,” Takoda will have chicken and sweet potato waffles, hamburgers and deep-fried Oreo cookies, along with more than 24 American beers and dozens of American whiskies.

In addition to its year-round beer garden on its roof, the restaurant will have indoor seating with a bar.

According to a news release:

Additionally, for guests seeking late night snacks after a night out on the town, TAKODA will offer a special menu featuring select items from the dinner and dessert menu including Bacon Popcorn; Wings; Spinach Dip; Rosemary Parmesan Tots; Soft Pretzel & Beer Cheese; Seasonal Crème Brûlée, and the Deep Fried Oreos. The late night menu is available Friday and Saturday from 11 p.m. to 1 a.m.

more stories
Previous
Adams Morgan Pottery Shop to Hold Last Holiday Sale Before Moving
Next
What to Expect Around Town This Weekend (Dec. 12-13)