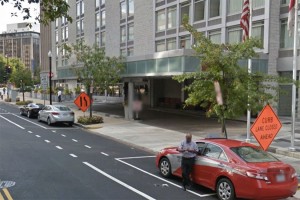 A man looking to meet someone for a date at a Dupont hotel was beaten and robbed instead this weekend, police said.

The man was entering the hotel room of a person he met through a dating website when three people ambushed him, according to authorities. The three individuals then hit the victim in the face before one of them grabbed his wallet with $260.

The victim was brought to a hospital for treatment.

Police arrested three people wanted in the robbery. The identities of the suspects weren’t immediately clear.

The crime was one of at least a dozen attempted or completed robberies in the Borderstan coverage area between Friday afternoon and Sunday night. According to authorities, the crimes (with suspect descriptions when available) included:

Photo via Google Maps, videos via the Metropolitan Police Department