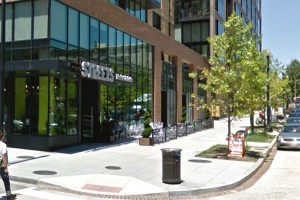 (Updated at 11:40 a.m.) A man got back his wallet from a robber, but not the money in it, after holding the thief’s cellphone hostage on the 14th Street corridor yesterday afternoon, police said.

The partial victory over the robber happened on the 2400 block of 14th Street NW about 1:15 p.m. The area includes Streets Market and Cafe and other retailers.

The victim was taking out the trash from a shop when a man approached him from behind, grabbed him and took his wallet from his pocket, according to authorities. The robber and the victim then scuffled.

The thief eventually fled, but the victim chased him. During the pursuit, the victim yanked off the robber’s coat, which had a cellphone it.

The robber came back to the victim, asking for the cellphone, police said. The victim then asked the thief for the wallet.

The thief dropped the wallet without the money on the ground. The victim declined to give back the cellphone, however.

The robber then started to move toward the victim, according to authorities. But a group of people by now had arrived in the victim’s defense, and the thief ran away again.

A description of the suspect wasn’t immediately clear.

The crime was one of at least four attempted or completed robberies in the Borderstan coverage area since yesterday. Police said the robberies included: