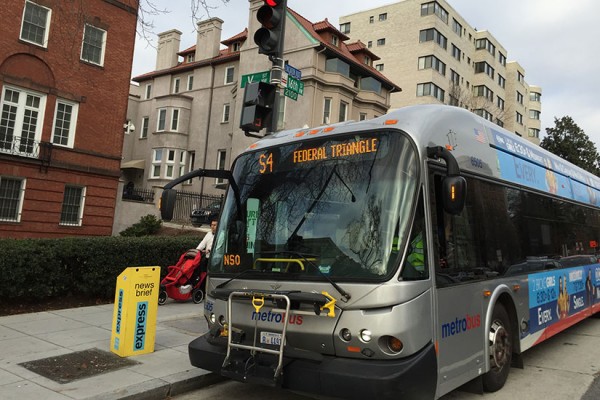 (Updated at 5 p.m.) The District Department of Transportation is moving ahead with a plan to add bus-only lanes to 16th Street NW in a bid to improve public transit along the corridor.

Megan Kanagy, a DDOT transportation planner, announced last night at a community meeting that the agency is in favor of bringing temporary bus lanes to the road at rush hour in an effort to fight the overcrowding and erratic service that often plague the S1, S2, S4 and S9 lines, according to local blog Greater Greater Washington.

From 7-10 am, the curb lane heading south would be for buses only; from 4:30-7:30, it would be the northbound curb lane. The bus lane would extend from Spring Road down to Lafayette Park.

DDOT would further analyze making 16th Street south of U Street, which right now is 4 wide lanes, into 5 narrow lanes so there could be a reversible lane. This would mean a reversible lane during rush hour for this whole stretch (the median north of Piney Branch wouldn’t go anywhere).

DDOT was reviewing plans that would let buses and cars share 16th Street as they do now, create bus lanes from 7 a.m. to 10 p.m. on weekdays or have the rush-hour bus-only areas.

The Adams Morgan Advisory Neighborhood Commission this month backed the rush-hour bus lanes, despite concerns from commissioner JonMarc Buffa and his neighbors from Beekman Place at 16th and Belmont streets NW.

The peak-hour/peak-direction bus lane would save 2.5 minutes of travel time, the most of all of the improvements. #16thStreetBus

The bus lanes might arrive as early 2018, DDOT spokesman Terry Owens said in an email. But he warned that installation is dependent on other planned improvements to bus transportation on 16th Street.

Another public meeting on the 16th Street bus plans is scheduled for Jan. 21.