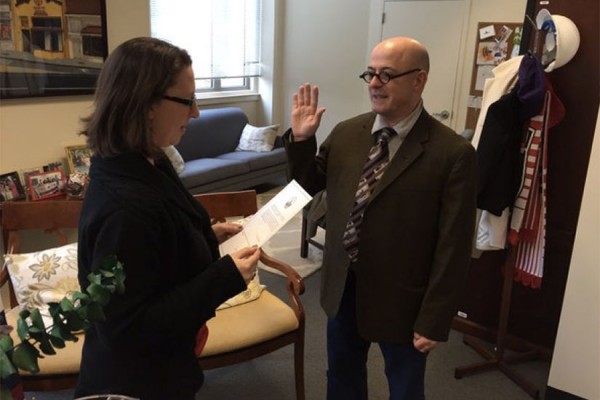 A real estate agent has succeeded a dog walker on the Columbia Heights Advisory Neighborhood Commission.

Realtor Richard DuBeshter, who ran unopposed for the ANC 1A06 seat vacated by pet care company owner Patrick W. Flynn, officially took office during a swearing in ceremony today. Flynn resigned from the commission last month to devote more attention to his business.

DuBeshter said he’s seen the “good, bad and very ugly” of Columbia Heights since he came to the neighborhood in 2000. Since his arrival, DuBeshter said he has served on the North Columbia Civic Association, and has strived to make his neighborhood a better place by participating in community clean-ups, safety walks and work to create the Trolley Park at 11th and Monroe streets NW.

As a commissioner, DuBeshter said he will work to spruce up the tree and flower boxes in the 11 Street commercial area, promote open public spaces and take steps to fight unsanctioned pop-up homes and other illegal construction.

“I really think it’s part of a realtor’s responsibilities to maintain the integrity of communities,” DuBeshter said.