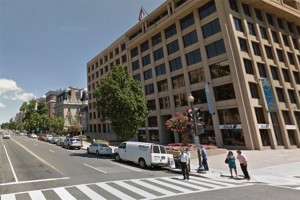 Three masked thieves with a handgun robbed a man within about two blocks of Farragut Square last night, police said.

The victim was walking in the area when three men approached him, authorities said. One of the men then pulled out a handgun. “Give me your s–t,” the man with gun said, according to police.

The victim then tried to fight off the man and knock the gun away, authorities said. But he was unsuccessful.

Police said other crime also happened in the Borderstan coverage area since Friday afternoon, including: