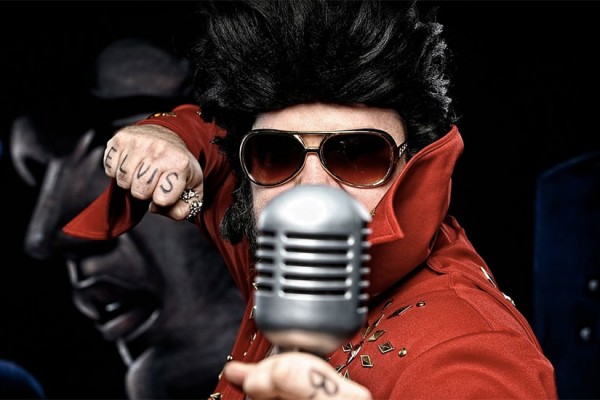 Burlesque performers and unusual boxing contenders are set to pay homage to Elvis Presley through a “fight club” meeting in Columbia Heights next month.

Billed as “the most bizarre way to celebrate the King of Rock ‘n Roll’s birthday,” the annual theatrical performance is slated to bring “sexy, subversive and surreal content” to the GALA Hispanic Theatre (3333 14th St. NW) Jan. 8 and 9, according to a news release.

In past performances at GALA, “Bridezilla” and “Godzilla” have duked it out, and “Diane Rehm” and “Stephen Hawking” have engaged in fisticuffs, all in honor of Presley. But the combatants in the latest version of Elvis’ Birthday Fight Club won’t be revealed until the shows start.

Between the bouts, burlesque performers also will take the stage and something called the “Quaalude Toss” will happen.

From the news release:

The punch-drunk-logic behind Elvis’ Birthday Fight Club starts with the toilet of Graceland, Commodious, mishearing his King’s dying wish. Elvis probably said he wanted a night club, but Commodious believes he wanted a Fight Club. So, with the limited resources of a toilet, he set out to celebrate The King’s birthday, not with party hats and cake, but with back alley fisticuffs and hot tah-tahs.

Tickets for the shows cost $20 online.