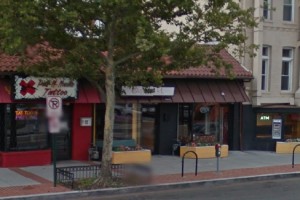 A 24-hour chicken restaurant might arrive on the U Street corridor as early as this winter.

Just Chicken could open within the first few months of 2016 near the east entrance to the U Street Metro station if its application for a liquor license is approved without any delays, Cynthia Simms, a representative of the eatery, told Borderstan today. It will occupy the former Bistro on U Street space at 928 U St. NW.

The restaurant is expected to serve booze and fried chicken, as well as chicken with barbecue sauce, salads and waffles, among other chicken dishes.

“Whatever way you can cook chicken,” Just Chicken is planning to have it, Simms said.

Gladstone Dainty, who owns Just Chicken and the building it will occupy, is looking to fill a void he sees in the late-night dining scene on U Street in his first restaurant, Simms said.

“The one thing that is lacking on U Street is something other than pizza” late at night, she said.