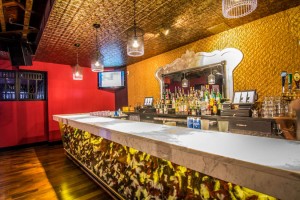 Someone rang in the New Year at a Dupont Circle bar by taking a bite out of a man’s finger during a fight, police said.

The altercation began when the man punched a woman in the face, a witness told authorities. Somebody then grabbed the man and started to fight with him.

The brawler eventually bit off the fingertip of the man’s right index finger. Police found it on the third floor of Dirty Bar, in front of the bar counter.

The man was hospitalized, according to authorities.

A woman also fought off a man who tried to sexually assault her in Shaw on New Year’s Day, according to authorities.

The incident occurred on the 600 block of M Street NW about 5 a.m. Friday. The area is less than a block east of the Walter E. Washington Convention Center.

The woman was in the area when a man punched her, covered her mouth and dragged her toward a building, police said. The man then attempted to remove the woman’s pants. But she fought him off and fled.

In addition to these attacks, shootings also were reported on L Street NW this morning and in Columbia Heights Friday.