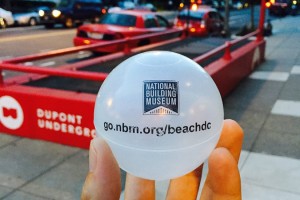 Remember the 650,000 plastic balls that Dupont Underground volunteers salvaged from a National Building Museum exhibit in September? They’re finally being put to use.

The competition tasks local artists, architects, designers and members of the public with conceiving a design “that engages and responds to the unique qualities of the Dupont Underground’s east platform, a massive, curving, 14,000-square-foot venue.”

According to the contest website, “the winning entry should be thoughtful, provocative, witty, safe, and executable on a limited budget, in a limited time frame, and within the confines of the site.”

Dupont Underground director Braulio Agnese said the door is open for “everything from a performance piece to somebody slicing them in half and papering the entire space with them.”

Entries needn’t use all 650,000 balls, Agnese said. But he added that the designs should at least prominently display them.

Entries will be judged by a jury composed of Dupont Underground founder Julian Hunt; the executive director of the National Building Museum; a senior curator of modern and contemporary art at The Phillips Collection; several architects and a local artist.

The winner will be announced on March 21. Members of the public will be able to view the winning installation several days a week between April 30 through June 1.

more stories
Previous
Dupont Bar Brawler Bites Off Man’s Fingertip at New Year’s Party
Next
‘We Can Make This a Homicide,’ Armed Robber in Shaw Threatens