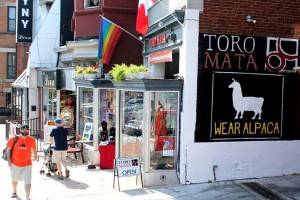 An Adams Morgan purveyor of Peruvian clothing, jewelry and fabric is closing its doors after 10 years in business.

“After more than ten years, Toro Mata will be closing our 18th Street shop on January 24th, 2016,” the announcement reads.

“We will forever be grateful for the many memorable experiences and treasured friendships that have come our way,” the announcement continues. “We are especially thankful for the consistent support we received from our Adams Morgan neighbors over the years.”

He added that “people from other neighborhoods, tourists, and conventioneers” are no longer visiting the neighborhood like they once did.

“We’ve been fighting a downtrend for several years now,” Nixon said. “The neighborhood is going through some drastic changes right now.”

Nixon, who described the store’s impending closure as a much-needed break from the “grind of retail,” said the store may soon open its doors somewhere else in the city.

“We’re looking at several opportunities,” Nixon said. “We’re going to give this some serious thoughts and due diligence.”

more stories
Previous
‘We Can Make This a Homicide,’ Armed Robber in Shaw Threatens
Next
Borderstan Blueprint (Jan. 5-11)