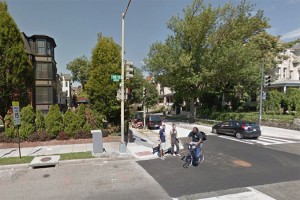 A man with a gun robbed a woman in Columbia Heights yesterday afternoon, police said.

The armed robbery happened on the 1300 block of Kenyon Street NW about 3:15 p.m. The area is about a block east of the DC USA retail development.

The woman was walking in the vicinity when she felt a tug on her purse, according to authorities. She then turned around and saw a man with a handgun.

Soon after, the woman let go of her bag and ran away. The man fled in the opposite direction as the victim, taking the purse.

A woman also was injured in a robbery in Lanier Heights last night, according to authorities.

The robbery occurred on the 1800 block of Clydesdale Place NW about 10:30 p.m. The area is about three blocks northwest of the Safeway in Adams Morgan.

The woman was walking in the vicinity when two men approached her, police said.

“Whatz up!” one of the men said, according to authorities.

The men then grabbed a bag the woman was carrying, knocking her to the ground, where she hit her head. She began to scream, drawing people to the scene.

The robbers soon after jumped in a car and drove away.

The woman was brought to a local hospital for treatment, according to authorities. She has since been released.