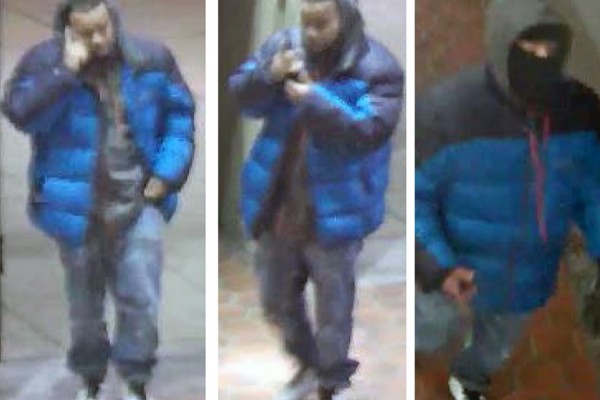 The Metro Transit Police Department has released three photos of a man sought in connection with an attempted robbery which left someone with an ear laceration near the U Street Metro station Tuesday night.

The photos show a man in a puffy blue winter jacket, blue jeans and white gym shoes. At least two of the images appear to be from inside the Metro station. In one of them, the man appears to be wearing a black mask.

The man doesn’t have any warrants out for him at this time, according to authorities.

The victim was attempting to sleep when a robber “demanded his ‘stuff,'” The Washington Post reported. When the man refused to hand over his possessions, the robber cut the man’s ear.

A concerned local emailed the Metropolitan Police Department’s Third District listserv to ask about seeing police tape, “a pile of bloody clothes” and police officers near the Metro station at 9:15 p.m. Tuesday.

Authorities later emailed the listserv and said “Metro Transit Police report that the victim sustained a non-life threatening laceration to the ear.”