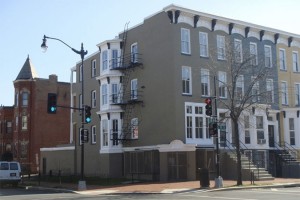 A restaurant called The Bird is set to bring a “full array of poultry” to Shaw diners in the coming months, the eatery’s owner has told Borderstan.

The Bird, which will occupy two floors at 1337 11th St. NW, is slated to start serving chicken, as well as “globally inspired poultry of every stripe,” this summer, owner David Winer said in an email yesterday.

“We will have amazing fried chicken but that’s the tip of the iceberg,” said Winer, whose company, Eat Well DC, also is behind The Pig, Logan Tavern and other local restaurants.

Chef Michael Bonk, Eat Well DC’s culinary director, still is working on the menu, Winer said. But customers can expect the chef to use “every part of the animal” in his dishes, he said. Winer also is seeking a liquor license for The Bird.

Winer initially considered opening a quick-service fried chicken eatery downtown, before the project fell apart. He then decided to create a full-service poultry restaurant when he came across the 11th Street building in Shaw, where he and his business partner, Peter Eskra, live.

“This space and place will not look, feel or taste like anything anyone might be expecting from us,” Winer said.