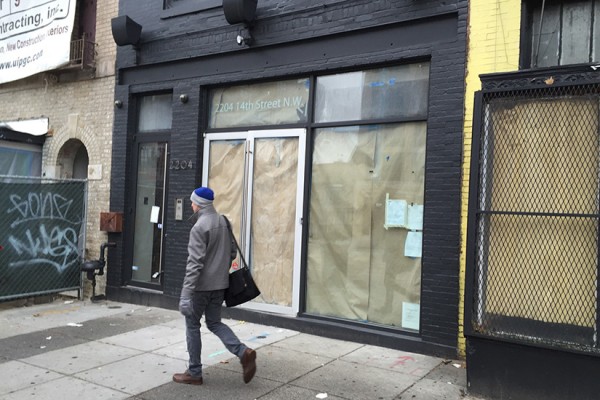 The new eatery, called Sakerum, will serve cocktails, sushi and Latin food late into the night, according to a press release. The restaurant will seat 110 people, span two levels with a retractable roof and is set to open later this spring.

Though Barcode co-owner and chef Stephanos Andreou declined to provide many details when we first reported this story in January, a new press release reveals more about the forthcoming restaurant:

Sakerum, a new sushi bar, Asian-Latin restaurant and cocktail lounge, will open just blocks away from the intersection of 14th and U Street (2204 14th St NW) this spring. Owner Stephanos Andreou’s vision for the two-story, 3, 300-square-foot resto-lounge is based on the Japanese concept of the izakaya, a warm, welcoming gastropub, tinged with the flair of a Latin lounge.

The first floor will house Sakerum’s colorful sushi bar, led by chef Khan Gayabazar, formerly of Fujimar and Maté. The second floor boasts a retractable, glass rooftop, which will accommodate up to 90 guests. Sakerum’s menu of sushi and Latin-inspired Asian dishes will offer an exciting blend of flavors and cultures based on innovative recipes.

Mixologist Gina Chersevani, of Union Market’s Buffalo & Bergen, is responsible for Sakerum’s beverage program, which will produce fresh sugar cane on-site for cocktails and drink flights. Chersevani’s cocktail menu will perfectly complement Chef Gayabazar’s fare, and guests will enjoy both in an environment that is upscale and warm.

The design team at Swatchroom has invoked a sleek, modern aesthetic inspired by both cultures. The eatery’s interior highlights textiles from both worlds, including whimsical art, found objects and custom wall murals. Because the Sakerum concept celebrates two of the most iconic spirits representing both regions — sake and rum — the elements of the restaurant’s namesake are used in the polished rice and sugarcane motifs found in the logo, created by The General Design Co.

“D.C. is primed for a restaurant and bar like Sakerum, which brings together two incredibly vibrant cultures under one roof,” says owner Andreou. “We want our guests to always feel like they’re getting the best of both worlds, from a culinary and cultural standpoint.”

Andreou’s partner and fiancee Constandina Economides is no stranger to the district’s dining scene. Granddaughter of the late Ulysses G. Blackie, Economides’ family was behind legendary D.C. dining institution, Blackie’s House of Beef.