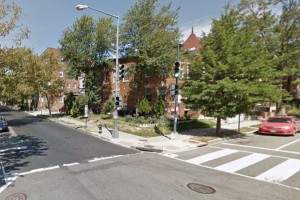 Burglars wielding handguns broke into a Columbia Heights apartment and forced a woman inside into a bathroom before they made off with suitcases and an iPhone yesterday afternoon, police said.

The burglary occurred in an apartment building on the 1100 block of Columbia Road NW about 5:30 p.m. Monday. The area is about two blocks southeast of the DC USA retail development.

The woman and a man were sitting in the living room of their apartment when two armed individuals and an accomplice forced their way in through the front door, which was locked, according to authorities.

One of the burglars with a gun pointed it at the woman while forcing her into the bathroom. It wasn’t clear what, if anything, the burglars did to the man who was with her.

Two of the burglars then grabbed two suitcases and an iPhone from the apartment before all three of them fled.

Police haven’t released a description of the suspects. But the burglars possibly drove a light blue Hyundai Sonata with Maryland license plates.