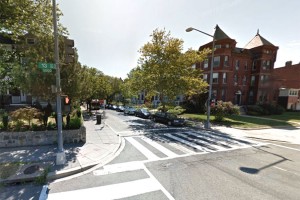 A man driving a sport utility vehicle punched a scooter rider and then flashed a knife at him during a road rage assault in Columbia Heights last night, police said.

The attack happened on the 1200 block of Columbia Road NW about 9:45 p.m. Monday. The area is about a block southeast of the DC USA retail development.

The scooter rider was driving in the vicinity when a man tapped the rider’s elbow with his SUV, according to authorities. The rider then smacked the side of the SUV.

The SUV driver got out of his vehicle soon after. He then punched the scooter rider in his head, which was protected by a helmet.

“I’m going to kill you,” the SUV driver told the scooter rider, according to authorities.

A crowd began to form at this time. Noticing an increasing number of bystanders, the SUV driver returned to his vehicle and drove away.

Police haven’t released a description of the suspect. But he drove an orange Lincoln SUV with license plates that said, “EEK-778,” according to authorities. It wasn’t clear what state issued the tags.