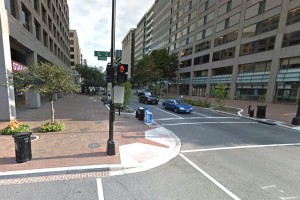 (Updated at 11:15 a.m. Thursday) Police are looking for a man with a mustache who they say robbed a shop near Dupont Circle yesterday afternoon.

The robbery happened at a “specialty store” on the 1100 block of 19th Street NW about 4:45 p.m. Tuesday, according to authorities. Police later identified the business as the Dunkin’ Donuts at 1107 19th St. NW.

The robber threatened an employee of the store before taking any undetermined amount of cash and fleeing, police said.

No injuries were reported.

more stories
Previous
Board of Zoning Adjustment Gives Blessing to St. Thomas Parish Project
Next
Z-Burger to Give Free Burgers to Howard Students Next Week