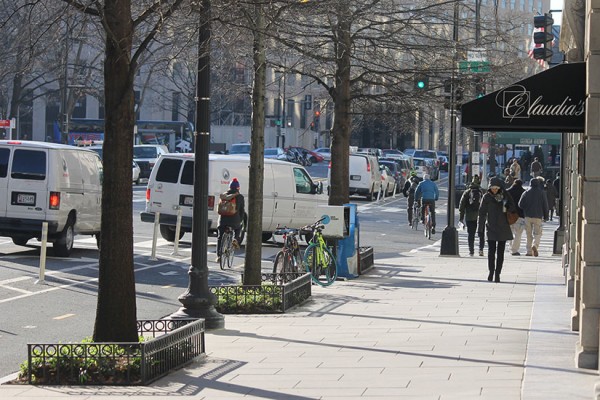 (Updated at 4:57 p.m.) Commissioners with Dupont Circle’s ANC 2B have had a change of heart regarding a request from Claudia’s Steakhouse (1501 K St. NW) to support the restaurant’s bid for valet parking.

The steakhouse seeks to launch a valet parking service that would include a staging area in six metered spaces close to the restaurant. Claudia’s previous bid for valet parking prompted 2B-09 Commissioner Noah Smith — who was not in attendance during last night’s meeting — to scold the K Street restaurant over its “repeated disregard” for public space and resulted in unanimous opposition from the commission.

But the ANC took a softer approach when reconsidering the request during its monthly meeting at the Brookings Institution in Dupont Circle.

Abigail Nichols, 2B-05, said that, although the commission had some previous “concerns,” she sat down with Claudia’s owner Claudia Rivas in December and “developed a good working relationship.”

Rivas, who attended last night’s meeting, noted that she addressed the issues with signs in the bike lane almost immediately after Smith brought them up during the meeting in November. She also added that there was no way of determining whether some of Smith’s grievances — namely, the allegation that the steakhouse operated a valet service in the K Street bike lane — could even be attributed to the restaurant.

“Mr. Smith had noted that there was a car parked in the bike lane,” Rivas said. “But there’s no way to know for us that it was from … our restaurant.”

But not all of ANC 2B’s commissioners were on board with the idea, namely Commissioner Daniel Warwick, 2B-02, who asked whether the steakhouse could share its valet service with nearby Georgia Brown’s (950 15th St. NW) instead of operating its own.

“I’m personally uncomfortable with any valet parking on a bike lane,” Warwick said. “That’s a place for bikers, not a place for people to be walking out of their cars.”

Rivas said that diners “shouldn’t have to cross a light” to reach the restaurant, and Claudia’s assistant manager David Bowing added that the steakhouse is “kind of a destination … We have a big following from the Maryland community.”

“So we … should be supporting a valet permit on a bike lane … so Maryland drivers can come to a steakhouse so they don’t have to cross half a block?” Warwick shot back.

After some back-and-forth between Warwick and Bowing, Nichols noted that many restaurants in the ANC’s single member districts had issues with valet parking and bike lanes, not just Claudia’s Steakhouse, and said she would “prefer not to make Claudia’s the case for our general concern about the bike lanes.”

Stephanie Maltz, 2B-03, suggested that the commission grant the steakhouse’s request, but only for a six-month trial period to start.

Though Nichols objected to the notion, Commissioner Nicole Mann, 2B-08, agreed that a six-month trial period was a good idea.

When the issue was put to a vote, the ANC decided 3-2-1 to give its blessing to the steakhouse’s request for valet parking with the six-month stipulation included in its resolution of support.