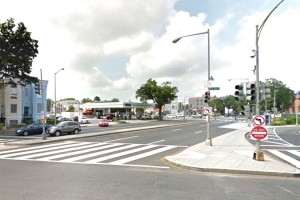 Someone with a knife cut a man on a walk in Shaw yesterday afternoon, police said.

The attack occurred on the 400 block of Rhode Island Avenue NW about 5:45 p.m. Wednesday. The area is about three blocks east of the north entrance to the Shaw-Howard Metro station.

The victim was walking in the vicinity when he got into an argument with somebody, according to authorities. That person then pulled out a knife and slashed the man with it.

The man soon after walked to the Howard University Hospital for treatment. The hospital is about five blocks away from the scene of the crime.

Two thieves robbed two men at gunpoint in Shaw last night, too, according to authorities.

The armed robbery happened on the 900 block of M Street NW about 11 p.m.

The victims were entering the Mount Vernon Plaza apartments at 930 M St. NW when two men followed them inside and up an elevator, police said.

One of the men told the victims to stop. The victims turned around and saw a man with a handgun.

“Give us everything,” the man with the gun said, according to authorities.

The victims complied, handing over cash, cellphones and payment cards.

The robbers then fled.

Police today also released a video of a man wanted in connection with a robbery at a Dunkin’ Donuts (1107 19th St. NW) Tuesday afternoon.

The man is seen grabbing money from what appears to be a tip jar at the shop. A worker then took money from the cash register and handed it to the man before he left.