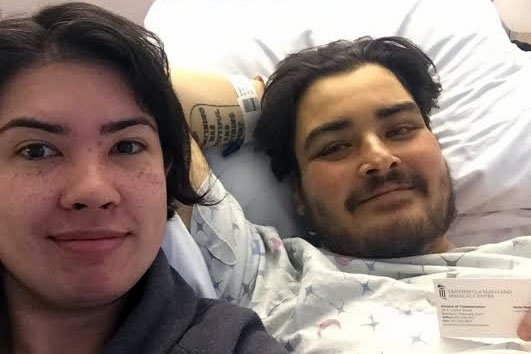 The co-owner of the High Dive (2337 18th St. NW) said he’s fortunate to be alive following a near-death experience.

“About a month before it all started, I started acting erratically,” Stuart said. “I wasn’t functioning. You’re basically going nuts. It’s like crazy people type stuff, which of course, worries Tristan.”

Though Stuart was unaware of it at the time, his liver was precariously close to failing and causing his scatterbrained behavior. One night, while Stuart was feeling particularly unwell, he took some over-the-counter pain medication.

“I must have taken a handful of the damn things,” recalled Stuart. “Next thing I know, I’m in and out of this bizarre dream state.”

He was then rushed to George Washington University Hospital, where his prognosis was not good. Doctors told him that his liver was almost completely non-functional and that he may die.

“They said, you have full-blown liver disease,” Stuart said. “I’m a bar owner. [I thought], it’s going to be difficult to get a new liver on short notice.”

Though liver disease can be caused by things like alcoholism and certain diseases, Stuart said his condition was a case of bad luck.

“I was just born with a shoddy liver to begin with,” Stuart said. “I just kind of have a bad liver.”

His wife Marissa came to his side. Family and friends were told to prepare for the worst.

And then, Stuart seemed to recover.

“By some bizarre circumstance . . . I just sort of bounced back,” he said. “And honestly nobody knows why I came out of it.”

With his condition improved, Stuart was transferred to Baltimore University Hospital. But he wasn’t out of the woods the woods yet. His doctors told him he urgently needed a liver transplant, a tall order for a bar owner and regular drinker.

“They said you’ll be dead in three or four days, which is a crazy thing to hear when you’re 35 years old,” Stuart said.

And with the help of one doctor — who Stuart recalled casually saying, “I’ll get you a liver,” — he was able to find a suitable donor.

“They said . . . if you’re serious about not ever drinking again, we’ll take your word for it,” recalled Stuart. “Which is miraculous, because I was given a transplant that has taken remarkably well. I got really, really lucky.”

And so far, so good.

Though Stuart is still in the hospital in Baltimore — and he likely will be for another two or three weeks — he said he has recovered remarkably.

“I am doing what the doctors describe as nothing short of miraculously well,” Stuart said. “I probably won’t be up and running, walking around like a normal person for about a year . . . but everything is looking pretty sharp.”

So, what’s next? Stuart, who’s focused on getting better, said he’s not completely sure.

He doesn’t know if or when he’ll go back to work. But he has no plans to give up his co-ownership of the High Dive.

“I don’t know what capacity I’ll be involved with the bar when I’m out of here,” Stuart said. “The High Dive is . . . like a child, and I never want to be completely detached from it. [At the least], I’ll go in there and a drink club soda.”

As soon as he’s able, Stuart said he plans to take his wife Marissa on a cross-country road trip.

“We’re going to try to hit every state in the nation,” Stuart said. “I’ve never been to Niagra Falls. I’ve never seen Mt. Rushmore. . . . It’s like, I’ve been working, I’ve been playing video games, and you realize, sh-t, I need to do all this stuff.”

more stories
Previous
Nadeau to Hold Special Community Talk on Park Morton
Next
What to Expect Around Town This (Long) Weekend (Jan. 16-18)