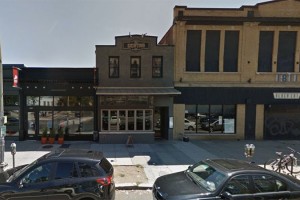 A club goer on the 14th Street corridor had his shirt ripped off and was whacked with a high-heel shoe in an early morning fight with a group of women over the weekend, police said.

The clubber got into an altercation with three woman at the bar, according to authorities.

During the fight, the man’s shirt was torn from him, and one of two men who accompanied him was choked. El Centro employees then ushered the women out of the bar.

About 10 minutes later, the men left the bar and found the women waiting for them outside, police said. The brawl resumed soon after.

One of the men then was choked and knocked to the ground, while another one was hit in the nose.

The men eventually fled to a nearby apartment building where two of them lived, and the women pursued them, according to authorities.

But before the men were able to escape inside, one of the women mounted a final attack on the man who had his shirt ripped off. She hit him in the head twice with one of her high-heel shoes.

The men declined medical attention. But the women, who told police the men had attacked them, were brought to a local hospital for treatment.

It wasn’t immediately clear if authorities have made any arrests in the case.