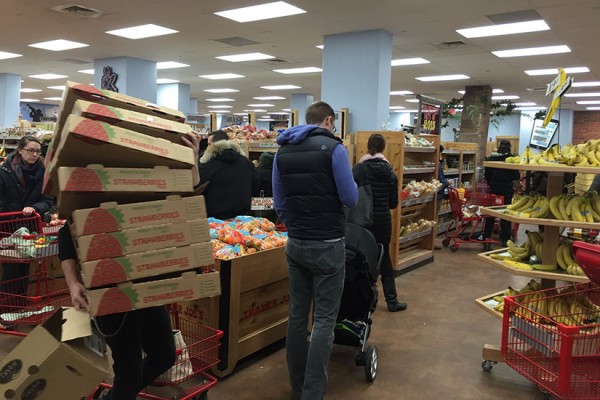 Onions have joined snow shovels and ice melt in a growing list of items in high demand at stores on and near the 14th Street corridor this afternoon ahead of this week’s blizzard.

At the Whole Foods on P Street NW, all yellow onions were gone and only red onions remained, befuddling shoppers.

“That was weird,” Capitol Hill resident Virginia Brown said as she stood in line to check out.

Next to the yellow onions, an area for russet potatoes also was empty. There was a dwindling supply of asparagus, too.

But Whole Foods appeared to have an ample amount of milk, eggs and other staples. A Borderstan editor observed workers throughout the store adding more food to shelves throughout the afternoon.

The store also didn’t seem overly crowded with check-out lines that were only a half-dozen or so customers deep.

Shoppers at the Trader Joe’s on 14th Street weren’t that lucky.

After grabbing dwindling supplies of frozen pizza and chicken, they stood in a line that wrapped throughout the store this afternoon.

Despite shelves that were emptying quickly, Eric Lekuch of Clarendon said he was able to get what he needed, including toilet paper.

“That trumps everything,” he said of the bathroom tissue.

Business also was brisk at the Logan Hardware on 14th Street.

The store earlier today had sold out of it shovels and most of its ice melt. But workers were busy opening boxes for about 200 more shovels.

“They’ll be gone by the end of the day,” sales associate Mark Rakes said.