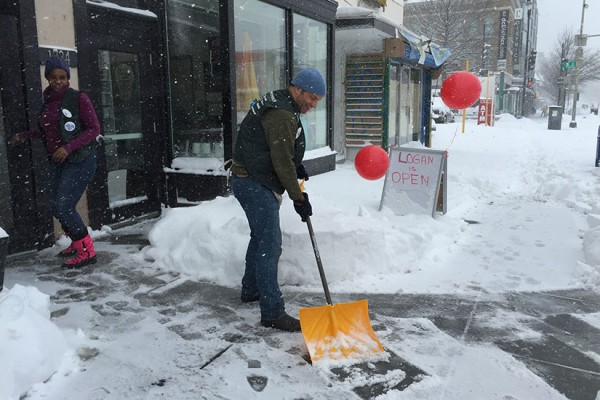 There are a few places where you can get a hot meal or stock up on blizzard supplies in Logan Circle, for now. But if you want food from a major grocery store, you’re out of luck.

Many of the workers at the businesses warned that they might not stay open all day and could close, like the Trader Joe’s on 14th Street and the Whole Foods on P Street.

Megan Bosko, a Ted’s manager, said the restaurant wasn’t as busy as normal, but still had a good amount of business.

At Logan Hardware, the store still has shovels and ice melt, said store manager Joe T., who declined to give his last name. Sleds are sold out, however.

The shop is selling garbage can lids and short buckets to sledders instead, he said.

“We have a few alternatives,” Joe said.

We haven’t ventured beyond parts of the 14th Street and U Street corridors this morning in search of open businesses. But if you know of any that are serving locals, please tell us about them in the comments.

Here are some other businesses that are open in the area:

Stacey & Casey are ready behind the bar! Come on over https://t.co/AdydBQxLqN

14th Street is OPEN!!!!! Heat up your hands after shoveling by holding falafel and fries!!!

AdamsMorgan is OPEN!!!!! Heat up your hands after shoveling by holding falafel and fries!!! #blizzard2016

Team Squirrel is digging us out. We'll be OPEN soon! #snowmaggedon2016 pic.twitter.com/C4NFpsCcQ8

Our #ShawDC location will be open today! Stop by & warm up with spicy thai food!

#snowzilla can't keep us down #cantstopwontstop Open till 4, call to check or check Twitter https://t.co/IOt4JSSRLb

We're open! Join us for brunch with 2-for-1 Mimosas & Bloody's, plus our full menu with Snowzilla hot drink specials and $4 beers.

Days like this, it takes a lot just to get open & serving food/beer! We will be open at 11:30 in our dining room & upstairs bar for BRUNCH!

We open at 11am this morning for Brunch & Bottomless Mimosas + our #Snowzilla drink specials! @PoPville @BYT @BtchesWhoBrunch @fritzhahn

#Snowzilla doesn't scare us. We are open! Come get brunch. Here's some bloody inspiration to brave the blizzard pic.twitter.com/vQlSIskA02

This morning we monitor 12 inch of snow. So our #snowmaggedon2016 deal continue at Convivial! 12% off your check… https://t.co/ez0hAjCRAi

Ain't no party like a #ramenparty in the middle of #snowmageddon! We will b open at noon for… https://t.co/HP8VX02FV6

Bar opens at noon. Kitchen should be opening at 4pm depending on staffing. We will keep y'all posted!