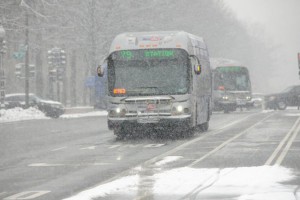 More buses are set to hit the roads tomorrow. But some routes still won’t have service.

Metrobus is restricting its service to “severe snow routes” on 16th and U streets NW, among other roads.

On 16th Street, only the S4 buses will have normal service. The S2 bus will take a detour, and the S1 and S9 buses won’t run.

All other bus service information for tomorrow is available on the Washington Metropolitan Area Transit Authority’s website.

Metrobus will begin service on a “severe” weather service plan at normal weekday service times on Tuesday. Under the severe service plan, Metrobus service will be available on 79 regional routes. Under Metro’s severe snow plan, only the major routes will have bus service, and only on the busiest portions of each route.

Bus riders are advised that even on routes where service is operating, delays and detours are possible due to road conditions.

Additional bus routes will be restored when it is safe to do so.

Metrorail also will have service for all of its lines except the Silver Line tomorrow starting at 5 a.m.