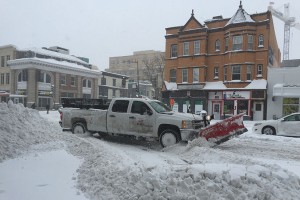 Snowplows are making their way through the District’s roads after the blizzard, helping bring out the asphalt that lies beneath the slush.

But have they made it to your street yet? Can you see the pavement?

Councilmember Brianne Nadeau of Ward 1 wrote in an email to her constituents yesterday afternoon that the D.C. government’s goal is to get all streets cleared by later today. Alleys will not see snowplows, however.

The District received around 24 inches of snow and brought in 400 extra contractors for a total of 600 workers deployed for snow removal. We had 39,000 tons of salt ready, and have gotten 3,000 tons down so far. Although It was difficult to salt during the storm, the rest is getting out now. The plan today is to make major thoroughfares passable and make progress on secondary and residential streets. On main thoroughfares not all lanes will be passable yet. The goal is to be able to get to every residential road in the next 24 hours. While the District does pretreat troublesome alleys, unfortunately it does not plow them. This has been a long-standing policy due to the fact that there isn’t an effective way to clear them. I understand this may be frustrating. Claudia and Tania on my team have been out in the ward all morning with the Mayor’s staff (in a special vehicle, don’t worry!) to oversee the progress. It’s slow but steady.

Please keep in mind these teams are responding to an historic storm so we expect it will take some time and we ask for everyone’s patience. I will be following the team’s progress closely. You can follow plows online at: http://snowmap.dc.gov.

Is your road clear as of this morning? You can weigh in through the survey and in the comments. If you write a comment, include your street.