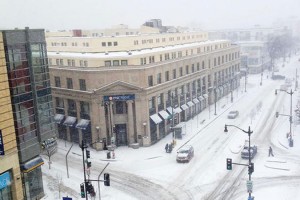 Locals taking advantage of the $1-per-day-parking at the DC USA retail development are getting more time to move their cars before the deal ends, Councilmember Brianne Nadeau of Ward 1 announced today.

The special parking arrangement for Columbia Heights residents went into effect Friday morning, when the District’s snow emergency started. The deal was set to end at 8:30 p.m. today, two hours after the emergency is scheduled to conclude. But now locals with cars at DC USA won’t have to begin paying the complex’s standard parking fees until after 10 p.m. tomorrow.

Nadeau noted in an email to residents:

The official Snow Emergency will end at 6:30pm today, Wednesday, which ends the parking restrictions on certain roads. If you parked at DCUSA to take advantage of the $1/day Snow Emergency rate, I have worked with the Mayor to extend the rate until tomorrow, 1/28, at 10pm. After that time, regular rates apply.

more stories
Previous
Winter Restaurant Week Extended Through Next Wednesday
Next
POLL: Did You Call Dibs?