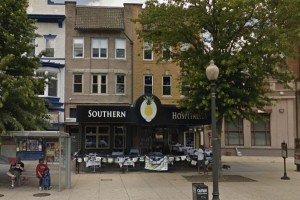 A man with a knife threatened to kill a worker whom he blamed for not getting a job in Adams Morgan yesterday, police said.

The attempted stabbing happened at 1815 Adams Mills Road NW about 1:30 a.m. Tuesday. But the incident didn’t involve an employee of Southern Hospitality, which rents space at that address, restaurant owner Anthony Lupo said. Rather, a contractor working on the Adams Mill building was caught in the dispute, he said.

The worker was inside when a man came in through the back door, according to authorities. The man then flashed a knife, saying he would kill the worker.

He noted soon after that he was upset that someone else was hired for the job instead of him and blamed the man he threatened to kill, according to police.

The man with the knife then tried to stab the worker several times. But the worker was able to deflect him with a mop strainer. The man eventually fled.

Police this week also announced they are searching for two men wanted in burglaries in Dupont Circle this month and in December.

Authorities today released footage of two women wanted in a theft in Dupont Circle this month, too.

more stories
Previous
POLL: Did You Call Dibs?
Next
WMATA: All Buses to Run Tomorrow, Some With Detours