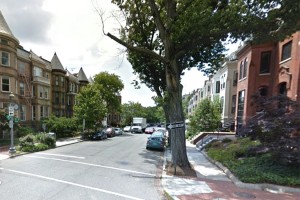 Three thieves got into a Dupont Circle apartment and used a knife to threaten a man inside before they drove him into a bathroom last night, police said.

The armed burglary happened on the 2100 block of O Street NW about 10 p.m. Thursday. The apartment, which is about a block southwest of the Dupont Circle park, is on the same block as a home burglarized Jan. 6.

In last night’s incident, a 21-year-old man was in his apartment when three people entered, according to police. The three individuals then assaulted the man, flashed a knife and forced him into a bathroom.

The burglars fled with an iPhone, a laptop, a backpack and $20 in cash, among other items.

Police haven’t released a description of the suspects.

Also in Dupont, someone sleeping near the now-shuttered YMCA woke up and pulled a knife on a security guard who asked the individual to leave early yesterday morning, according to authorities.

The security guard was walking in the area when he saw somebody sleeping, police said. He then told the person to leave. But the individual declined, starting an argument.

Eventually, the guard began to walk away, and the person who was sleeping in the area followed him. The individual then flashed a knife at the guard.

“Next time I see you out here, I’m gonna f—k you up,” the person told the guard, according to authorities.

The individual left soon after, but returned to the scene of the crime when police officers were interviewing the guard.

The person was arrested. But the individual’s identity wasn’t immediately clear.

more stories
Previous
Cupid’s Bar Crawl Put in Jeopardy After ABRA Denies License
Next
What to Expect Around Town This Weekend (Jan. 30-31)