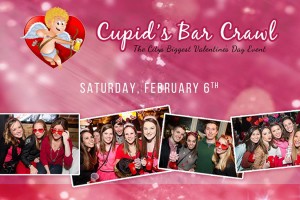 Cupid’s Bar Crawl, an annual bar-hopping event scheduled to take place in Dupont Circle next weekend, may not go forward as planned thanks to a recent order from D.C.’s Alcoholic Beverage Control Board.

In its decision, the ABC panel said it had concerns related to the amount of tickets sold for the event.

“The applicant indicated in the application that the maximum number of participants would be 2,900,” the board’s order reads. “Nevertheless, the applicant advertised on Facebook that the event would involve more than 5,000 people.”

The panel also alleged that Michael Bramson, a managing member with Project D.C., told an ABRA investigator “that he was aware that they had oversold the event on the day of the event” by almost 700 tickets.

The panel added that, during a Halloween pub crawl earlier this year, Project D.C. “oversold tickets … by anywhere from 77 to 300 tickets, and had no means to ensure that the event did not exceed the maximum number of participants.” The event also lasted two hours longer than originally planned, according to the panel.

Additionally, the ABC panel cited in its decision past complaints from Golden Triangle BID’s executive director, Leona Agouridis, over destruction and crowded conditions caused by the Nightmare on M Street pub crawl.

But board member Ruthanne Miller dissented with the order to deny Project D.C. a pub crawl license.

“This decision in this case is one of first impression under the new Emergency and proposed pub crawl regulations,” Miller writes. “The majority relies on Section 712.18, ‘The issuance of a pub crawl license shall be solely in the Board’s discretion,’ and Section 712.21, ‘When reviewing an application for a pub crawl license, the board may consider the applicant’s conduct and management of previous pub crawl events.'”

“While I agree that these provisions may be relied on in denying a pub crawl application, I disagree as to the Board’s reliance on them in denying this application, the applicant in this case has been conducting pub crawls in Washington, D.C for approximately five years without incident prior to the Halloween pub crawl referenced in the order.

Given that the transgressions noted by the board in this order do not appear to have impacted public safety nor contributed to community complaints, police action or other negative impacts on the community or the environment, I would have allowed this pub crawl to proceed.

In my view, the board should have issued a warning to the applicant and emphasized the criteria for denial of a pub crawl in the future.”

In an email to Borderstan, Bransom said that Project D.C. intends to file a motion for reconsideration of the decision, but did not comment further.