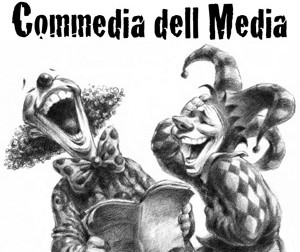 A group of journalists who live and work in D.C. will try to hack it as comedians during this year’s Commedia dell Media show at DC Improv (1140 Connecticut Ave. NW).

The event, which returns from a two-year hiatus on Feb. 25, will pit 10 media members against one another in a standup comedy showdown.

Here’s the full lineup from the Commedia dell Media webpage:

Will the Post rely on strength in numbers? Can Washington City Paper‘s Jessica Sidman use her newly minted celebrity status to gain the crowd’s favor? Does Washingtonian’s Harry Jaffe just totally have this in the bag? It’s clearly a toss-up.

The show will also feature performances by Commedia dell Media’s 2013 winner Natalie McGill and former competitor Alexandra Petri, who will appear for the first time in public as her viral Internet alter ego, Emo Kylo Ren.

All proceeds from the event “will help support the Journopalooza Fund’s goal to protect and assist journalists operating in Syria and other conflict areas.” Tickets are $20 in advance and can be purchased here.