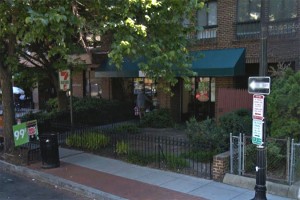 A man left at least $1,000 in damage at a Dupont Circle convenience store after he assaulted a shop employee with a display rack in a payment dispute early yesterday morning, police said.

The man refused to pay for something in the store in the lead-up to the assault, according to authorities. After he declined to pay, the man attacked the 7-Eleven employee with a display rack and hit the worker with several items.

The assailant then left the store and fled in a car. Police have since arrested a man in connection with the crime. But his identity wasn’t immediately clear.

During the attacker’s time in the 7-Eleven, he damaged a credit card reader stand, a payment card terminal, an iPad and a sign, causing at least $1,000 in damage, according to authorities.