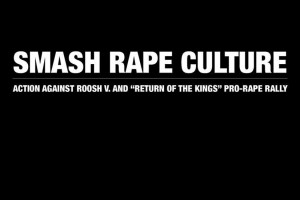 (UPDATE: This meetup has purportedly been cancelled. Read more about it here.)

A counter protest is in the works for a planned “masculine” man meetup set to take place in or around Dupont Circle this Saturday.

Daryush Valizadeh, who also goes by the name Roosh V and runs the notorious “masculinity” blog Return of Kings, has called for a meeting outside the Starbucks at 1501 Connecticut Ave. NW Saturday from 8 to 8:20 p.m. as part of what he’s calling an “International Tribal Meetup Day.”

During the D.C. meetup — which Roosh himself is rumored to be attending — men who stop and ask, “Do you know where I can find a pet shop?” and hear, “Yes, it’s right here,” from another man will receive directions to the site of a meeting for Return of Kings readers.

But people like Matt Kirkland, one of the counter protest’s organizers, hope to thwart the event they’re calling a “pro rape rally.” Kirkland’s plan is for about two or three dozen people to show up in front of the Starbucks on Saturday chanting slogans, holding signs and waving banners.

“It’s important to … call these people out for who they are,” Kirkland said. “It is a public health hazard for them to be out.”

And if there’s anyone who knows how to put a buzzy counter protest together, it’s Kirkland. In December, he helped organize the protest that famously stopped a well-known actor from allegedly trying to burn the Quran in front of the White House.

But what if none of the anti-feminists show? After all, Roosh’s events have sparked similar concerns across the globe and in turn has prompted some organizers to move their meetups to private locations.

“In a lot of the events, once they’ve found out about counter demonstrations, they’ve made it private,” Kirkland said. “They are now trying to hide some of it.”

“Roosh himself has said he’s coming to D.C. … this is their coming out party supposedly,” Kirkland said. “Because it’s D.C., this would be a huge embarrassment if they had to hide from us.”

And even if the masculine meetup turns out to be a no-show, that’s still a reason to celebrate, Kirkland said.

“It would be kind of ironic,” he said, “if the coming out was their climbing back into the hole or their mom’s basements.”