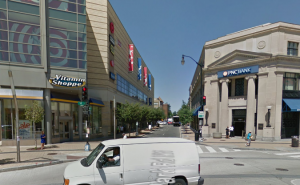 Someone stabbed a man in Columbia Heights earlier this evening, said D.C. Police.

The crime occurred near the intersection 14th Street and Park Road NW shortly before 5:22 p.m. The victim was conscious when police arrived on the scene, authorities said.

Police are currently on the lookout for two men described as “Hispanic and wearing all dark clothing.”