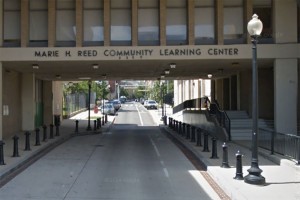 A thief with a mask flashed two guns at a woman and robbed her in Adams Morgan over the weekend, police said.

The armed robbery happened on the 2220 block of Champlain Street NW about 3:45 a.m. Saturday.

The victim and another woman were walking under the Marie Reed Aquatic Center breezeway when a car with five men drove near them, according to authorities. Soon after, one of the men got out of the car and pulled out two handguns.

“I ain’t going to pop you,” the armed man said, according to police. “I just want your sh-t.”

He then took the woman’s black leather jacket and car keys before fleeing.

A thief wearing a shirt with “Vapiano” written on it also beat up and robbed a man in Logan Circle this weekend, according to authorities.

The violent robbery occurred on the 1500 block of 15th Street NW about 4 p.m. Saturday. The area is about a block northwest of the P Street Whole Foods and shares the block with St. Luke’s Episcopal Church. It also is about a half-mile from the Vapiano restaurant at 1800 M St. NW.

The attacker eventually grabbed the victim’s backpack and wallet before fleeing.

Two men robbed someone at gunpoint late Friday night near Howard University, too, according to authorities.

The armed robbery happened on the 2600 block of 11th Street NW about 11:30 p.m. Friday. The area is about two blocks west of Howard’s campus.