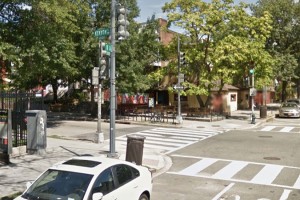 A man was robbed at gunpoint in Columbia Heights last night, police said.

The armed robbery happened on the 1100 block of Kenyon Street NW about 8 p.m. Tuesday. The block includes Tubman Elementary School.

The victim was in the area when two men approached him from behind, according to authorities. One of the men then put a handgun to the back of the victim’s head.

“Give us your stuff or I’ll kill you,” the man with the gun said, according to police.

The armed man and his accomplice soon after took the victim’s wallet, gym bag, iPhone and other belongings before fleeing.

One of the suspects wore a hooded sweatshirt and a zip-up vest, according to authorities. The other suspect had a bandanna.