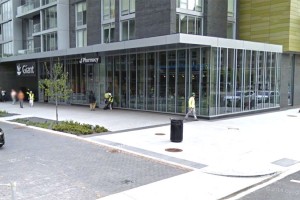 Two men robbed someone at knifepoint in Shaw this morning, police said.

The armed robbery happened near 8th and O streets NW about 9:15 a.m. The CityMarket at O development, which includes a Giant Food and the Convivial restaurant, is at the intersection.

Authorities are looking for:

Police didn’t immediately have any other information about the crime.

Authorities today also announced the arrests of two men in connection with two separate burglaries in the Logan Circle area.

William Helton Brown, a 63-year-old resident of Northeast D.C., was arrested and charged in connection with a Nov. 11 burglary on the 1800 block of 14th Street NW. He is accused of snatching checks from a business.

Wesley Jones, a 60-year-old resident of Northwest D.C., was arrested and charged in connection with a Jan. 8 burglary on the 1300 block of Massachusetts Avenue NW. He is accused of taking electronics.