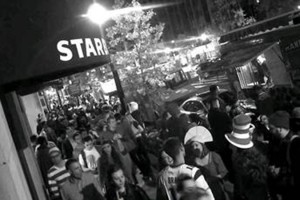 The rules, which were established on a trial basis last month, create a new event license fee for pub crawls, put a greater responsibility on organizers to clean up after events and give the board authority to veto bar-hopping events for any reason.

ANC 2B, the advisory neighborhood commission that covers Dupont Circle and the surrounding area, voted on a resolution to commend and comment on the Alcoholic Beverage Control (ABC) Board’s rules during its general monthly meeting last night.

“[Some recent pub crawls] have been pretty tremendous in terms of the negative impact on the neighborhood,” said Noah Smith, 2B-09. “Litter, public safety, trash, noise issues. We’re talking about hundreds and thousands of people coming to the neighborhood. … and there is nobody responsible for cleanup and public safety while this is happening.”

Smith, who introduced the resolution, added that he “applauds the ABC board for adopting these emergency rules.”

Though Smith said he thought the rules were “pretty good” overall, he did recommend a list of changes, including asking ABRA to notify the ANC of future pub crawl applications and create a rule that would penalize businesses participating in unlicensed pub crawls. Smith also suggested that ABRA create a provision “that assures more than one pub crawl is not licensed at the same time in the same area.”

Commissioner Mike Silverstein, 2B-06 and ABC board member, said three pub crawl applications have been denied since the emergency rules were established last month.

“Pub crawls can be helpful to an area if they’re done right and if they’re small,” Silverstein said. “But if you bring in too many people for a neighborhood to handle, you’re going to discourage retail and all kind of other things. If it’s too big for the neighborhood, it’s not appropriate.”

The ANC supported the resolution by a vote of 7-0-1.

Impacted businesses and members of the public will be able to weigh in on the new rules during a hearing at the Reeves Center (2000 14th St. NW) on March 2 at 1:30 p.m.